EMMERDALE vixen Charity Dingle could be set to commit murder as her dangerous game of playing Bonnie and Clyde with newcomer Mackenzie Boyd comes to an unsettling head over the festive season on the ITV soap.

Charity (played by Emma Atkins) has been venturing on a downward spiral of late, ever since she cheated on her fiancée Vanessa Woodfield (Michelle Hardwick) with newcomer Mackenzie (Lawrence Robb). Although she tried to stay away from him, the near-destruction of her relationship with the mother-of-one has pushed the troubled character right back into the arms of Moria Barton’s (Natalie J Robb) brother. However, this lust could turn to envy in upcoming episodes on the ITV soap as it seems the Emmerdale vixen is going to betray her partner in crime.

The drama kicks off over the New Year as the pair continue with their scheme to acquire stolen goods in exchange for money.

Part of their plan includes robbing a lorry full of merchandise they can sell but first, they need to get rid of the driver.

As the situation becomes more complicated, Charity ends up knocking out the innocent party as she whacks him over the head with a spanner.

With time of the essence, Mackenzie and his accomplice begin to shift the boxes from the heavy goods vehicle to their getaway car.

In the moment, the pair begin to flirt up a storm but things backfire when the driver of the van wakes up after being knocked unconscious. 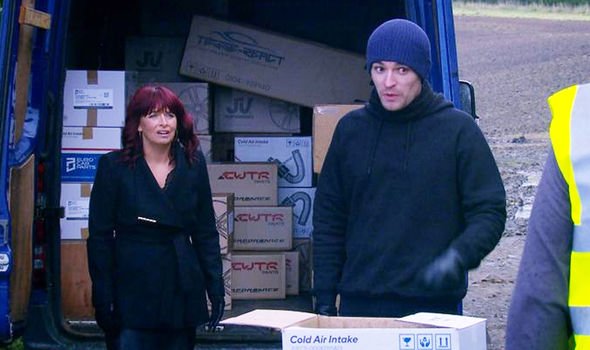 Not impressed with being assaulted, the lorry driver fights back as he gets his hands on a baseball bat and begins to wield the weapon towards Charity.

Viewers will have to wait and see what happens to the innocent party but this incident doesn’t stop the pair from committing more felonies.

After checking out the safe, Mackenzie comes up with a full proof plan to get his hands on some much-needed cash. 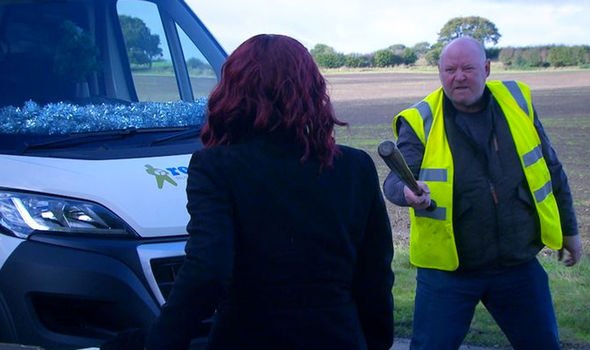 Unfortunately, it seems either Charity or the newcomer will betray the other as they plan to take the stash for themselves.

If it is Mackenzie who is setting up his partner in crime to take the fall, his accomplice will be least than impressed.

As a result, she could betray him too, by knocking him out so she can run away with the money before the authorities arrive.

However, could the mother-of-four have hit Moira’s brother a bit too hard and in fact murdered him in cold blood?

Charity has never killed anyone before, although she has attempted to get rid of a few villagers during her time on the soap.

Murdering Mackenzie would be her first hit, but will it become a hasty act of betrayal she will live to regret?

If she does get rid of her partner in crime once and for all, she will have to work hard to cover her tracks.

Actress Emma, 45, has recently spoken out about her alter-ego turning to the world of crime over the festive period.

The soap star explained: “Charity is convinced everyone has gone behind her back for the wrong reasons. At this point, there is no guessing what Charity is capable of or what she might do.

“She is past the point of no return. She feels scorned and plans to spoil other people’s happiness,” Emma continued.

Discussing her character’s relationship with Mackenzie, the actress added: “She knows full well she’s getting entangled with quite a dark force.

“But at this stage, the thrill of revisiting her illustrious past whereby she spends her time living on the edge and seeking a fix through illegal activities is one of the only things keeping her going.”