EMMERDALE’s Kim Tate is set to return to the village after months away, and she might not be alone.

Emmerdale villain Kim Tate (played by Claire King) has been AWOL from the village for the past few weeks, leaving her son Jamie (Andrew Lincoln) to his own devises which has had devastating consequences for certain Dales residents as he adopts her evil streak. The actress was away for medical reasons as she was shielding amid the coronavirus pandemic, but it looks like she’s set to return very soon as Jamie hands the Posners an eviction notice, suggesting she won’t be alone.

Wendy and Luke Posner (Susan Cookson and Max Parker) arrived in the village last year and moved into a cottage owned by the Tates.

But in upcoming episodes, the nurse is left distraught when she finds an eviction notice on the doorstep, and Luke vows to find out exactly why they’re being kicked out of their home.

“What’s he [Jamie] playing at?” he fumes as his mum panics about their future.

“I always pay [the rent] on time, I keep the house clean and tidy, I’m always careful with stuff like that!” Wendy wails. “The original contract was up for renewal but Kim said that would just a formality!”

While she worries about hiring a solicitor to back their corner, Luke promises to sort it one way or another.

While the timing may seem out of the blue for the poor tenants, there could be a very good reason why the Tates want them out all of a sudden.

Could Kim have lined up some new tenants for the cottage?

Speaking in July, Claire King who plays the tenacious Kim, explained why she didn’t return to work immediately once filming resumed. 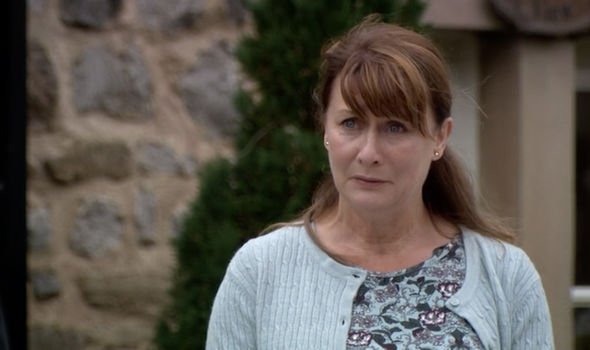 She told OK! Magazine: “I have arthritis, so my immune system is compromised, which makes you more at risk of catching the virus.

“I had to get a doctor to say I was fit for work, so it’s a case of waiting to be written back in.”

Could this be Kim’s big entrance as she arrives back in the Dales with some newcomers by her side?

Kim made a surprise appearance on Friday as she video called Jamie for an update on events at Home Farm.

In un-aired scenes, could the mother and son have spoken about freeing up the space for their friends or family to move in?

The devious Tate matriarch might be expanding by a few more…

Upon her return, Kim will be shocked to see how troublesome Jamie has transformed into a cunning criminal, who’s dodging the law after refusing to take responsibility for Moira Barton’s (Natalie J. Robb) hit and run.

The Home Farm owner has a reputation for being notoriously villainous and downright nasty when she wants to be, and it seems her son will have inherited those traits, too.

Speaking in a recent interview, Claire revealed she will struggle to deal with his scheming and conniving behaviour.

“It will be quite scary for her,” she told The Sun Online.

“She could manipulate him when he was softer. It will be a bit of a shock for her to discover that Jamie’s got this tougher side to him.”

But the actress added she won’t be “surprised” that he’s turned out the way he has, as her influence ultimately caused her son’s darker side to surface.

“I don’t think she’ll be surprised because she’s created it within him,” she admitted.