EMMERDALE’S troubled Will Taylor could be set to make an unexpected exit from the ITV soap as villain and arch-nemesis DI Malone seems to return from the dead next week to haunt him.

Will (played by Dean Andrews) currently has no idea Malone (Mark Womack) is dead and buried after Harriet Finch (Katherine Dow Blyton) and Dawn Taylor (Olivia Bromley) killed the Emmerdale villain in self-defence. For now, the father-of-one believes the corrupt detective has just gone missing and has finally left his family alone. However, with the dodgy police officer causing his arch-nemesis so much grief over the years, the latter is left petrified when he thinks the tormentor is back in the village. Desperate to escape his evil clutches once more, will the beloved character decide to leave the ITV soap for good?

The drama begins in upcoming scenes as Will becomes paranoid over Malone and spots someone he thinks is the villain.

Relaying his fears to his daughter, Dawn desperately tries to convince her father the corrupt police detective is gone for good without revealing her secret.

As Harriet ventures off to a religious retreat, it is left to the mother-of-one to try and make her father see sense.

Things quickly escalate as the troubled character then gets his hands on a gun, not taking any chances if his arch nemesis is back in the village.

His daughter is forced to remind him what happened the last time they had a firearm in the house, which saw he almost lose her son, Lucas Taylor (Dexter Ansell).

Despite Dawn’s harsh word, Will’s paranoia about Malone escalates beyond reality and then he discovers the truth about what happened to the villain.

The mother-of-one explains to her father how the corrupt detective held her hostage, tried to trick her into taking an overdose and then went to attack her.

Just at the moment she tells the troubled character she shot his arch-nemesis, Harriet walks back in as she decides not to go away.

Horrified her partner has been told without her prior knowledge, the vicar also realises her name has been left out the story. 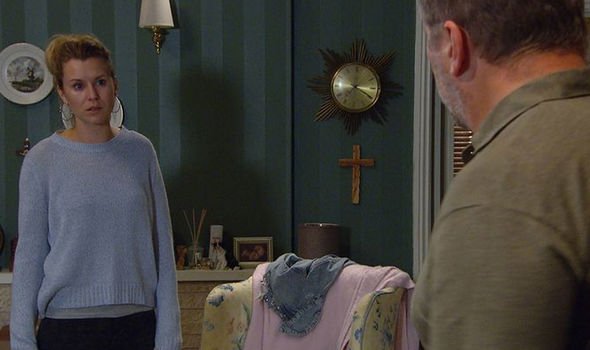 With his daughter in danger of being arrested and charged with murder, Will could make the ultimate sacrifice to save her.

The father-of-one could decide to tip off the police he was the one who killed Malone as he already has a criminal record.

However, wanting to keep his freedom, the troubled character could go on the run to evade capture, leaving the village for good.

An exit for actor Dean, 57, could coincide with the fact Life On Mars will be making a return to screens for a third and final season.

Speaking on This Morning back in July about the revival, Dean said: “The writers, Matt Graham and Ashley Pharaoh are in the process of writing four or five episodes, and they’re getting everyone back together who wants to come back.

“I believe Phil and John are very, very excited about it. Danny Mays, myself. I’ve just got to try and beg Emmerdale at some point in my life … if they still want me.”

Viewers will have to wait and see if Will does leave the village, but Harriet will be continuing to struggle with playing a part in Malone’s murder.

The dramatic scenes were filmed some weeks after the weeknight serial drama resumed filming in light of the coronavirus pandemic.

Stars of the show are now having to adhere to strict social distancing rules to prevent any spread of COVID-19.

Actress Katherine, 55, told ITV’s Lorraine on filming the episodes: “It was a bit of a worry because I certainly couldn’t see how it was all going to work.

“But Duncan Foster, who directed it, and all the camera guys and the crew and everything had worked it out brilliantly.